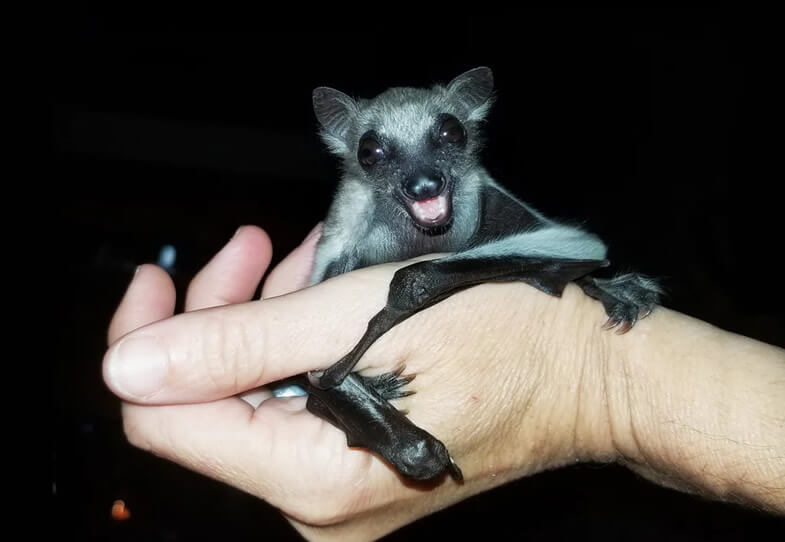 Ronan is an African fruit bat. His mother and father were two of over 90 bats rescued from a terrible situation when a facility in Michigan suddenly closed. Many elderly bats from that facility were transferred to Bat World Sanctuary. One of the older males, who would become Ronan’s father, was in such bad shape when he arrived that we did not think it would be safe to anesthetize him so he could be neutered. We also did not believe he had the energy to reproduce, so he was left to live out his “golden years” intact. As it turned out, he had plenty of energy!

Enter baby Ronan, our precious little accident that was not supposed to happen. Ronan’s mother, who was also rescued from the same facility, arrived frightened, uncertain, and in poor condition. When Ronan was born, the birth proved too much for her and she did not want to care for Ronan. Moriah, an extraordinary animal caregiver at Bat World, stepped in to be Ronan’s human mom and hand-raised him to be the spectacular bat he is today.

As Ronan grew, he was like a little monkey, reaching for everything in sight, including his human mom, who he did not want to be away from and would call to her whenever she was out of sight. Ronan was comforted by what is called a “mommy roll”, a special cloth roll with an attached blanket that wrapped around him. Mommy rolls give a baby fruit bat the security of feeling like he is nestled on his mother’s chest with her wing wrapped around him to keep him safe, secure, and warm. These mommy rolls are made by a well-known bat rescuer on the other side of the world, Meg, also known as Battie Blue. As soon as Meg found out about Ronan, she sent half-a-dozen mommy rolls and special nursers just for him, all the way from Australia.

When Ronan was a juvenile, he was moved to “the tree house” where the elderly bats at Bat World Sanctuary live in comfort. These oldsters taught Ronan how to be a bat by giving him affection and nurturing of his own kind. He was soon flapping his wings (pictured), eating fruit, and no longer wanting milk formula. He eventually graduated to the expansive flight enclosure where the colony lives, and it is there he tested his wings for the first time. He crash-landed on the padded floor until he got the hang of it. After he learned to fly and become a “real bat”, he never returned to the tree house.

Today, Ronan only interacts with his humans when he is given special treats, which is just the way we want it. Bats are happier when they are loved and accepted by their own kind. Ronan spends his nights eating fresh fruit, playing with toys, and flying and gazing out to the great beyond from the safety of the outdoor flight enclosure – his large, luminous eyes taking in all he can see.